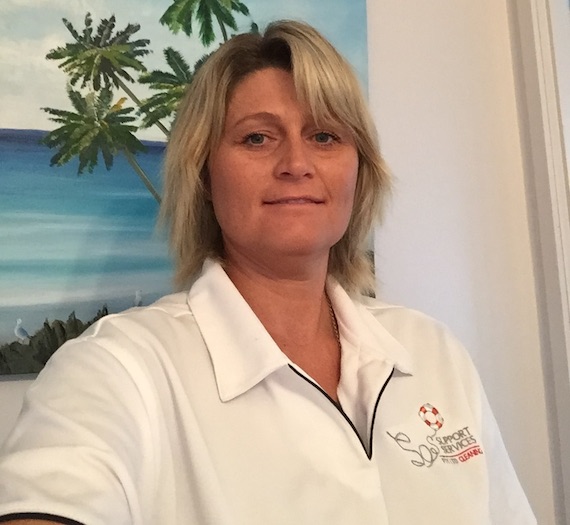 Vicky has had seen the inside of some of our most famous local world-class surfers houses on the Gold Coast.  Prior to working for SOS Cleaning Services Vicky landed a cleaning job for Jason Stevenson, founder of JS Industries, one of the leaders in performance surfboards in the world.  Soon after, Vicky became inundated with requests to clean house for the likes of Joel Parkinson, Occy and Luke Egan and many other World Class surfers living on the Gold Coast.  Sounds like a dream job Vicky!

That was when Vicky was picking up some extra money working for herself when her children were younger.  Now she works for SOS Cleaning Services doing residential cleans and occasionally holiday and bond cleans.  She enjoys working for SOS because she can work more or less, depending on her commitments with family.  “I’m not nailed down”, she said.

Originally she started part time with SOS Cleaning Services but that filled up quickly, which Vicky thinks is “great ‘cause my husband and I are concentrating on working hard this year to get ahead with our mortgage.  My husband’s putting in the hard yards at the mines so I’m doing the same at home”.

Vicky grew up around the North Coast of NSW and is surrounded by family.  Before she started having children she was a Pharmacy Assistant for the Owets at Pottsville, Cabarita and Mullumbimby, now, she is very excited that her family will be expanding with the first of her grandchildren due in March.

All the best with the new grandchild Vicky, thanks for all your hard work.